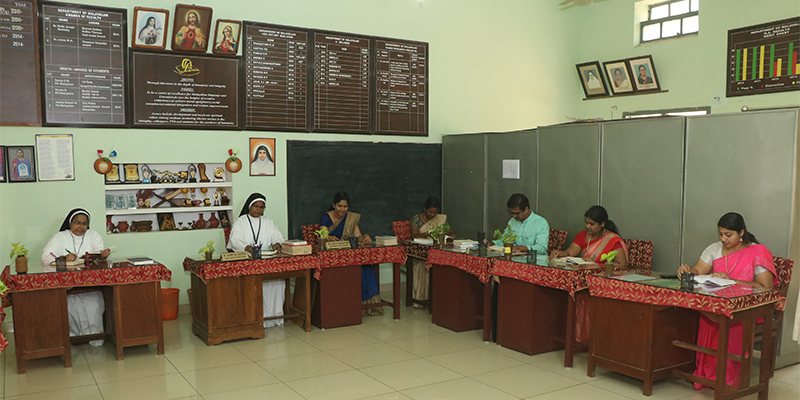 Curricular and extra curricular activities of the department opened a wide horizon of various dimensions of knowledge and enabled our students being equiped in professions like Teaching, Journalism,Media works, Lexicographic and Translation works. Ample opportunities exist for even those who are interested in folk art and culture.

After the regularisation of P.G.Malayalam Course  in the year 2010 the department was lead to new horizones by the appointment of five new faculties and various infra structured facilities like reseacrh oriented library modern tecnical equipments like desktop,laptop,LCD projector ,camera, tape recorder etc. We were able to produce 100 percentage result in the university  examination. In the year 2012 our student Ursula N. won KERALA PANINI AWARD for being the top scoreer in the inter university Examinations and recived merit scholarship. 30 of our old students National Eligibility Test (NET)  and 10 of them were qualified in the State level Educational Test (SET). Along with academic excellence we take almost care to inculcate social cultural and human values amoung the students . Our department prepair a wonderful platform for the students for the overall development of literary and artistic talents of our students. We also empowers our students to face all the challenges of their day today life by giving them councelling, enrichment and empowerment programmes to become the most powerful women community of our nation.

To be a centre of excellence for Malayalam language and literature, to sore the heights of creative competence, to achieve moral uprightness, social commitment, national integration and women empowerment.

Assure holistic development and inculcate spiritual values among students instituting sincere service to the almighty,  colleagues,  PTA and students for the goodness of humanity.

Though Literature to the Depth of Humanity and Intgrity

2. BSc Programme (In Other Pattern)

In the academic year 1999-2000, Malayalam Department established as PG department by introducing PG programme in Malayalam. There are 10 seats allotted for the PG Programme in the begning. Later it was increesed to 20 seats.The formal inauguration of the PG Malayalam Course was done by the Respected Vice Chancellor of the Calicut University, Dr. K K N Kurup on (January 2000) at 10am in the college auditorium. In his inogural address, he insisted the importance of the language studies in the college curriculum. He also pointed out the facts that the study of oriental languages, especially the mother tongue and its literature, enrich our culture and promote best human relationships in this scientific era.

Dr. M. Leelavathy [Rtd.Professor from Maharaja’s College Eranakulam and a well known critic in Malayalam] and Prof. Narayana Menon [Rtd. Professor from Sree Kerala Varma College Guruvayoor and renowned scholar in ancient literature and Malayalam Grammar] were appointed as Guest Lecturers for the MA classes. With their thought provoking and highly enlightened classes, our students were benefited a lot. Their dedication to the profession is highly commendable. Besides in the department the college, as a whole was privileged by their presence. Mrs. Jisha Elizabeth Varghese, Mrs.Soumini, Dr.Usha T.K., Dr.Shobana kumari were also worked as guest lecturers in the department. In the year 2010 P.G.Malayalam Course regularized.Hence the department was lead to new horizones by beeing appointed new faculties

Inorder to promote the PG Malayalam programme UG Malayalam Programme (Self Financing) also introduced in the year 2015. We are grateful to God Almighty for the achievements of best result and ranks of our students in the final year University examinations. Names of our first batch rank holders are as follows. Ashmi Kumaradas 5th Rank.Thasni P.K 10th  Rank, Arya U.P 12th Rank & Akhila P P 12th Rank.

Methods of teaching learning and evaluation

·         Students are given talks on relevant topics by the resource person

·          Students are encouraged to bring out literary articles like handwritten magazines,research magazines,banner,etc